ZEN IS AN APPROACH TO RELIGION. Though in reality, it is not a true religion by definition, since the practitioner of Zen does not worship any god in particular. It is a form of Mahayana Buddhism that seeks spiritual enlightenment through meditation, in which there is no consciousness of the self. It teaches that contemplation of one’s essential nature, to the exclusion of all else, is the only way of achieving pure enlightenment. The word Zen derives from the Chinese word ch’an, which in turn has its origins in the Sanskrit word dhyana that refers to a mind absorbed in meditation. The root of dhya means “to see”, or “contemplate.” It has its origins in the samurais of 12th-century China.

Ensõ is one of the sacred symbols associated with Japanese Zen Buddhism. The Circle of Enlightenment, as it is often called, is hand-drawn in one uninhibited brushstroke to express a moment in time when the mind is set free to let the body create. Its symbolism refers to the beginning and end of all things, the circle of life, and the connectedness of existence. It can symbolize infinity, the “no-thing” -the perfect meditative state of satori, awakening or enlightenment. According to Carl C. Jung (Swiss psychiatrist and psychotherapist), the archetype of the circle, found in the collective unconscious of mankind, can also be interpreted as the symbol of individual psychic development, signifying the roundness of the psyche.

Zen gardens, also known as Japanese rock gardens or “dry landscape” gardens, create a miniaturized, stylized landscape through an arrangement of carefully positioned rocks, moss, and pruned trees. It uses gravel or white sand, which is raked by monks, to represent waves on the surface of a body of water. The rocks themselves epitomize islands in the sea.

Some classical Zen gardens, like those at Daisen-in temple, have symbolism that can be easily interpreted as a metaphorical journey on the river of life. Others, like the ones at Ryōan-ji temple, resist simple interpretation. This last temple’s name is synonymous with its famous Zen garden, the karesansui (dry landscape) rock garden -thought to have been built in the late 15th century. The garden is a rectangle of 248 square meters. Placed within it are fifteen stones of different sizes, meticulously composed in five groups. The stones are surrounded by white gravel and the only vegetation is some green moss around the monoliths. They have been purposely arranged so that when looking at the garden from any angle of view (other than from above), only fourteen of the boulders are visible at one time. It is traditionally thought that only by attaining enlightenment would one be able to contemplate the elusive fifteenth boulder.

These gardens are usually surrounded by an external wall and meant to be seen while seated from a single viewpoint, outside the garden -such as the porch of the hojo (the residence of the chief monk of the temple). Classical Zen gardens were created, during the Muromachi Period, at temples of Zen Buddhism in Kyoto. They were intended to emulate the intimate essence of nature, not its actual appearance, and consequently serve as an aid to meditation about the true meaning of life. Centuries later, Zen gardens continue to exist in most Japanese temples.

The wall behind the garden at Ryōan-ji temple is another important element in a typical Japanese rock garden. This one, in particular, is made of clay stained by age, with subtle brown and orange tones. The enclosure reflects Wabi and the rock garden Sabi, together they reflect the Japanese worldview or aesthetic of wabi-sabi 1. While this rock garden is the best-known garden at Ryōan-ji, this temple also has a water garden (known as the Kyoyochi Pond) and a teahouse and tea garden. Near the teahouse is the tsukubai -a famous stone water basin, with water continually flowing out of it for ritual purification.

One can imply that my Japanese Zen photographs had their genesis in the Petroglifos de Boriquen series (1974-1996). Where aboriginal mythology, combined with rock art (pictographs and petroglyphs) and the way these ancestral stones are precisely laid on the ground (at the indigenous Taino ceremonial ballparks in my native land) mark a new era in solving the riddles of megalithomania in Puerto Rico’s astro-archaeological research studies.

Ricardo Viera, noted photography curator from Lehigh University Art Galleries, once asked me “Have you visited other countries, not necessarily your own, to document your themes related to that religious or spiritual quest that you seem so attracted by?” 2. I told him that I photograph all over the world for my own personal projects, having visited ten different countries during what I call my Asian Period (2010-2014). But it is the people, places, colors and forms of South and Southeastern Asia that I have found to be most inspiring. It is in China, Tibet, Nepal, Bhutan, Thailand, Cambodia, and Japan that I have captured my most sublime photographs that transcend their original documentary purpose and become timeless classics of our era.

While working in Japan, I concentrated my lens on documenting the mystical Zen gardens; as well as, the sacred temples where they are located. With the exception of eight photographs were taken at the Nezu Museum, in Tokyo, the rest of these memorable photographs were taken in Kyoto -formerly known as the Imperial Capital of Japan for more than one thousand years. Having seen my oeuvre, celebrated New York-based photography art critic Max Kozloff righteously affirmed  “You regard religious doctrines, no matter how parochial, as a participant in universal patterns of belief.”  3.

Previous bodies of my work apprise later series. It’s easy to juxtapose nature-filled photographs in these Japanese rock gardens to my earlier work done in Borneo. They are part of an ongoing project that had its beginnings deep in the Amazon River basin (2008) and ended six years later in the Land of the Rising Sun. My photographic vision and personal commitment to the preservation of nature transform Mother Earth into a majestic spiritual world. For this new series, I returned for inspiration to my foregoing Visions of Ancient Angkor (2010) images, using everything from the monumentality of the Hindu temples to the carefully detailed carved stones found in the lushness of the Cambodian jungle.

Consequently, these colorful images chronicle mankind’s eternal search for spiritual enlightenment. Where mythic time becomes the symbiosis between the secular and the divine. The universal interpretations of religious beliefs and the sacred status of centuries-old Zen art is what this esoteric work is all about.

1. Wikipedia: Wabi-sabi represents a comprehensive Japanese worldview or aesthetic centered on the acceptance of transience and imperfection. The aesthetic is sometimes described as one of beauty that is “imperfect, impermanent, and incomplete”. 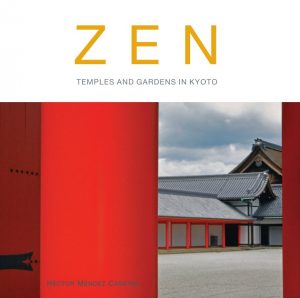 Zen: Temples and Gardens in Kyoto

This book includes 92 sublime color photographs that transcend their original documentary purpose and become timeless classics of our era; as well as, an illuminating text on the inspirational subject matter. 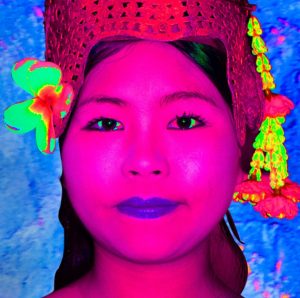 This book includes 125 striking photographs representative of this trilogy, as well as an enlightening conversation between renowned New York-based photography critic Max Kozloff and world-traveling photographer Héctor Méndez Caratini. It offers a rare insight into the artist’s creative processes.